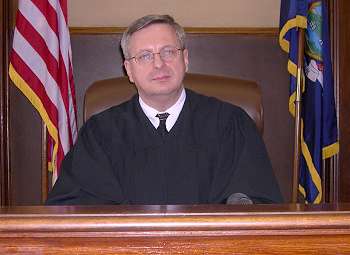 Michael Pietruszka was named the P&BA 2004 Man of the Year. The announcement was made at the General Membership Meeting on May 4.  This year’s Man of the Year is being recognized for his unending contribution to the growth of Polish Heritage and for his contributions to the community at large.

Michael takes his community ties very seriously, being an active member of many organizations, including Msgr. Nash Council of the Knights of Columbus, the 100 Club of Buffalo, the Urban League of Buffalo, the Buffalo State College Community Advisory Committee, the Northwest Buffalo Community Center, St. Gabriel’s Parish, the Lovejoy District Neighborhood Revitalization Corporation, Cub Scout Pack 325, the Msgr. Healy Foundation Scholarship Committee, the N.A.A.C.P., the Forest District Civic Association and the St. Joseph’s Guild and has been a member of the P&BA since 1988.

Michael Pietruszka was appointed to the Buffalo City Court in January of 1988 by Mayor James D. Griffin. In 1988, he was elected as the youngest full-time judge in New York State. Michael was elected to the Erie County Court Bench on November 3, 1998. In his more than sixteen years as a full-time judge, Judge Pietruszka has closed more than 30,000 criminal cases and thousands of civil matters. And he has been complimented for his innovative and even-handed approach by both litigants and attorneys.

Michael Pietruszka is a member of the American, the New York State, and the Erie County Bar Associations. He also belongs to the Association of Trial Lawyers of America, the Judges and Police Conference of Erie County, the Charles S. Desmond Chapter of the American Inns of Court and the Advocates Club of W.N.Y. He also serves on the Criminal Law Curriculum Development Committee and faculty of the NYS Annual Judicial Seminar, and the Eighth Judicial District Advisory Council. He is the Chair of the American Bar Association’s National Conference of Specialized Court Judges and has completed the Leadership Institute in Judicial Education at the University of Memphis. Judge Pietruszka has lectured to groups of judges on the American judicial system while in Poland, assisted the Slovak Republic in preparing legislation organizing its post-Communist era judiciary and hosted many foreign visitors interested in studying the New York State judiciary.

Judge Pietruszka has received a number of awards for his community activities, including the Buffalo Bison Baseball Polish American of the Year, National Columbus Day Committee Jurist Citation of Honor, the Pulaski Police Association Man of the Year Award, the Buffalo Chapter of the Southern Christian Leadership Conference’s Martin Luther King Jr., Human Service Award, the Hispanic Law Enforcement Officers Association Recognition Award and three Certificates of Honor from the N.Y.S. Bar Association. Judge Pietruszka served, along with U.S. Magistrate Judge Hugh Scott, as a Grand Marshal of the first Kosciuszko – King Festival Parade in 2000. He is also listed in two editions of Who’s Who in American Law, Who’s Who in America 2000, Who’s Who in the World 2001 and the first edition of Who’s Who in Polish America.