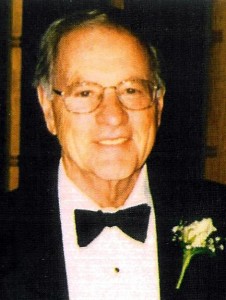 Steven Sielski was named the P&BA 2011 Man of the Year. The announcement was made at the General Membership Meeting on March 1, 2011.  Steve has been an active member and supporter of the P&BA for the past 61 years. Steve became a member only five years after the directors held their first board meeting after our Association assumed its current name in 1945. Steve is in an enviable position to be able to share with a majority of our membership the history of the P&BA during the 1950’s and 1960’s.

Steve met his wife, Doris, at Purdue University where they graduated in 1947 with B.S. Degrees in Pharmacy. After graduation Steve became a pharmaceutical salesman with Eli Lilly & Company where he enjoyed a successful 38 year career and retired in 1987. Steve and Doris will be married 62 years and have six children and five grandchildren. Along with his passion for music, Steve enjoys traveling, skiing, swimming, fishing and golf.