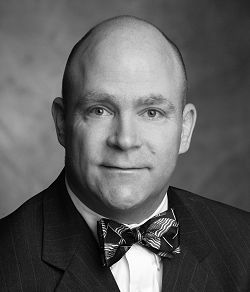 John Michalski was named the P&BA 2005 Man of the Year. The announcement was made at the General Membership Meeting on May 3rd.

John Michalski has been a member of the P&BA since 1991. He immediately became pro-active and has since made numerous contributions to our Association. He served on the Board of Directors for 10 years and held the office of President in 1999. John served on numerous Association committees and chaired many of our successful functions. He is “best” known for organizing a first class Summer Stag for a number of years which included “Johnny M’s” famous barbecued St Louis ribs.

John is a member of the Erie County Bar Association. He started his legal career at the Erie County District Attorney’s Office as Assistant District Attorney prosecuting criminal offences including homicide. He entered private practice in 1991. He was appointed Town Prosecutor, Amherst Court in 2000 and is serving in that position. In 2004, John was selected Prosecutor of the Year by the Prosecutors Association of Western NY.

In promoting the growth of Polonia and the Community, John is an Executive Board Member of the Solidarity Task Force, Political Action Committee. He is President of the Advocates Club, an association of lawyers of Polish descent, and was recently appointed as Board Member and General Counsel to the Amherst Senior Transportation Services.

The 45th P&BA Man of the Year entered private practice in 1991. He is engaged in the general practice of law at the firm Snyder and Michalski.