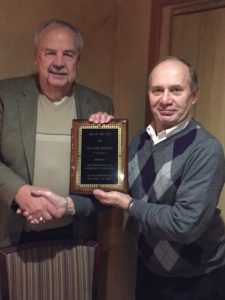 Walter Stepien became a P&BA member in 2006. In 2008, walter was elected to the board of directors, and took the position as a recording secretary. During his tenure of 8 years, he co-chaired a number of events with his brother to meet fellow members and gain experience in running various functions. The last 5 years, his favorite event is chairing the “general membership meeting” and having guest speakers. In addition, he helped co- chaired other events thru the years ( summer stag & christmas parties ).

He graduated from university of buffalo with a aeronautical engineering degree. His life at Bell Aerospace started as a data analyst engineer, on the lunar module engine that took the astronauts off the moon. Also, in addition, he traveled for the company as a field engineer, servicing systems for the air force and the navy. Retirement came to an end after 35 years of service. Walter served in the air force / reserves as a flight engineer with a tour of Viet Nam, flying covert missions,
supplies, and aero-med patients. After 25 years and 15,000 hours, he retired and hung up his flight suit for good.

Presently he volunteers at the Aerospace Museum, and the New York Central restoration projects.